In a week that many eyes were on the Federal Reserve and the US dollar, global crypto markets fell $3 billion in value, as the market continues to assess how the dollar will behave in inflationary environments. Stocks closed the week higher as the Dow Jones, S&P 500, and NASDAQ gained around +3% each.

Global crypto markets fell $3 billion on the week, as total market capitalization hovered around $361 billion to close out the week. Despite the flat week for Bitcoin, it still managed to preform substantially better than most of the large cap altcoins. Chainlink was the market outlier, rallying +7.75% during a bearish environment. Bitcoins market dominance maintained 59% levels throughout the week, as investors are still willing to take on additional risk with altcoins. 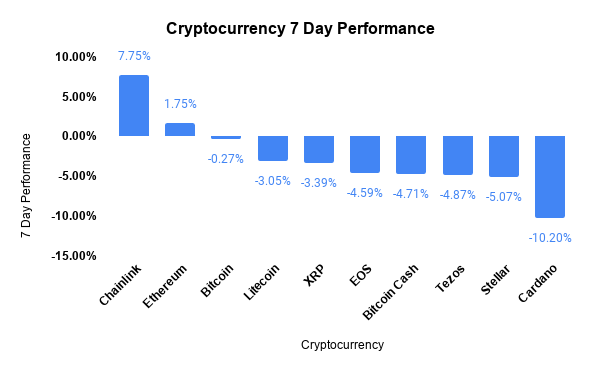 Bitcoin finished flat last week, as all eyes were on the Federal Reserve and the US dollar. As Visionary Financial outlined in a previous report, last week was important for traditional markets. Jerome Powell from the Fed held a virtual conference in which he addressed the topic of fueling inflation. He stated that the Fed planned to rollout new financial framework that would support increasing inflation above the 2% target. Despite many critics arguing this motive, the Fed believes that low inflation the last 8 years is creating macro risks. As reported by Visionary Financial, all eyes were on Bitcoin which has historically been highly uncorrelated to the US dollar.

During the Feds virtual event on the 27th, the US dollar surged despite the talks of ramping up inflation. Following the rise in the US dollar, it was quickly unable to maintain its momentum. It was quickly evident that the market was not as bullish on inflation as some thought. Many argue that increasing inflation in the current environment will increase structural economic imbalances, and create lower living standards. With the Fed planning to keep near 0% interest rates, many also believe this initiative will continue to prop up a dangerous asset bubble. 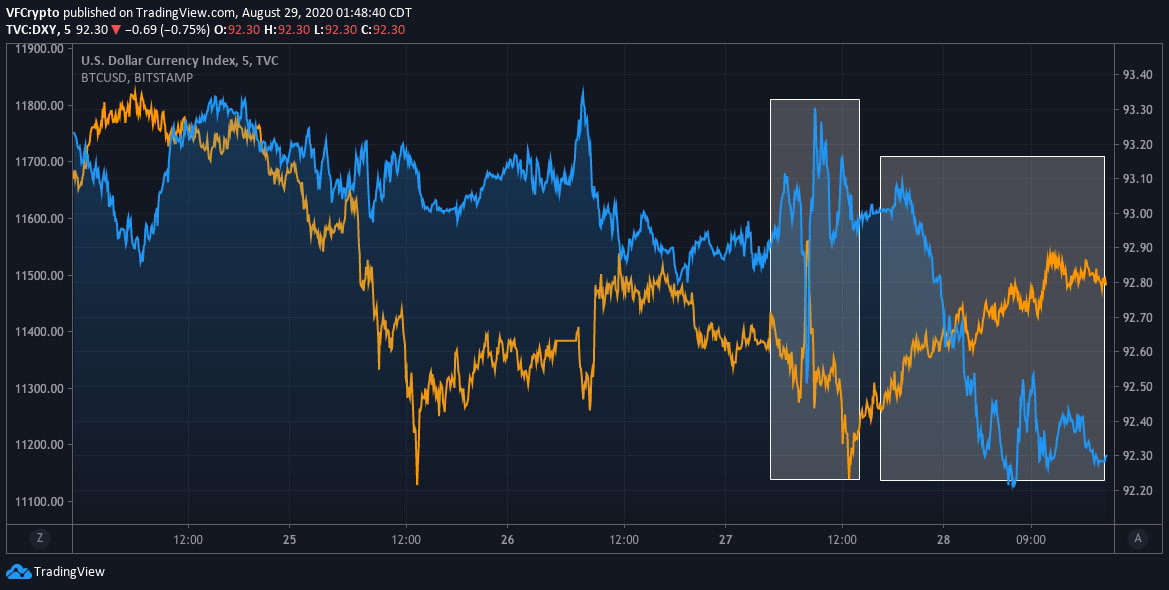 Over the last multiple years, Bitcoin has been highly uncorrelated to the US dollar. Last week was a perfect example in which BTC originally fell on the US dollar rally, but ended the week strong as investors second guess the Feds strategy moving forward. In addition, Bitcoin and Gold were highly correlated, as BTC continues to mature into a hedge asset. 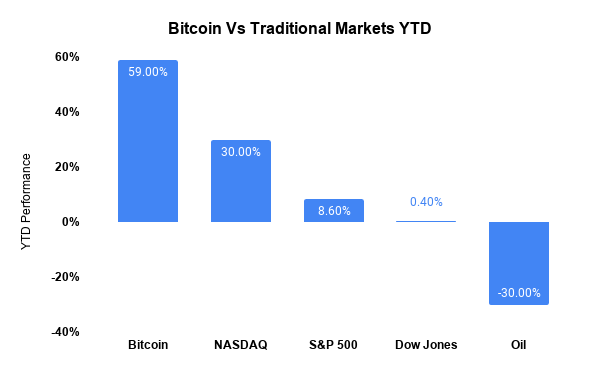 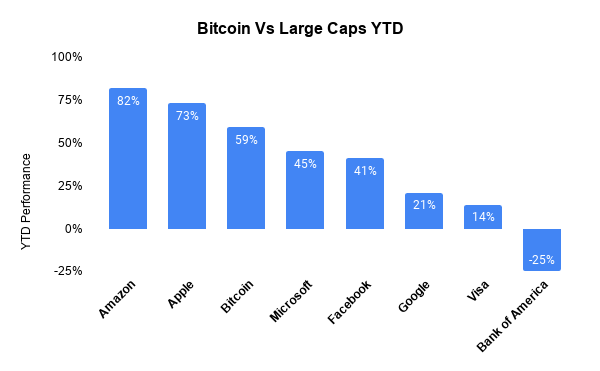 As mentioned above, Chainlink was the market outlier last week, rallying almost +8%. Over the last 30 days, Chainlink has surged +119%. Chainlink continues to capitalize on the DeFi boom this year, leveraging price data infrastructure to create a safer evolution for DeFi applications. It will be interesting to see Chainlink momentum going into next week, especially since Coindesk just reported that Chainlink has acquired a Blockchain oracle solution called “DECO” from Cornell University. The application is believed to be a successful foundation for up and coming sectors in crypto such as permissionless credit and decentralized identification.

Despite an economic environment that still raises many concerns, stocks continue to surge on future outlook. The Dow Jones, S&P 500, and NASDAQ all finished the week positive, as the S&P 500 is up almost +52% since the market bottom in late March. The support by the government in the form of fiscal policy has successfully kept the markets afloat this far. Many economists believe the market is showing signs of exiting a recession with important indicators like real estate and spending on the rise.

Despite signs of economic recovery, we can not forget the unemployment situation. Consumer confidence is in jeopardy if people do not get back to work. Initial jobless claims continues to register 1 million per week, which is still an issue on high alert. The job market is now seeing an environment where many temporary layoffs are turning permanent. According to recent reports, 1 in 4 temporary layoffs could turn permanent in the near future. It can be argued that macro focus has shifted away from unemployment metrics for whatever reason. The market will eventually shift its focus back to unemployment, which could create some issues for a top heavy stock market that has historically been correlated to consumer confidence.