The global crypto market surged $35 billion in value last week fueled by PayPal’s move to offer crypto integration, and their rumored acquisition of BitGo. Equities saw small losses last week as investors are hoping for a fiscal relief package before the upcoming election. On the bright side, 10-year treasury yields went up in a response to positive economic data.

The total crypto market added $35 billion in value last week with Bitcoin rallying +14.13% over the last 7 days. Bitcoins market dominance is hovering around 61%, which is about ~ 2% higher than a week ago. Altcoins followed Bitcoins momentum to the upside, with most of the top large-cap altcoins seeing significant growth. Litecoin and Chainlink were the top two performers. Global crypto markets got a massive push last week due to developments coming out of PayPal. 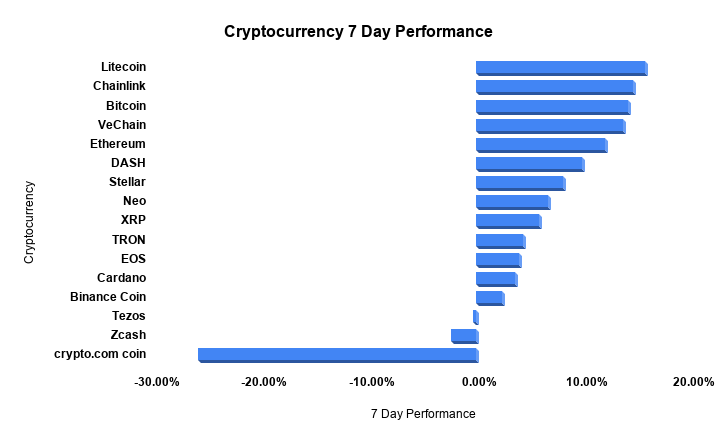 PayPal Falls In Love With The Crypto Market

In Bitcoin analysis last week, it was mentioned that PayPal was one of the main drivers behind the explosive move in Bitcoin. For those unfamiliar, PayPal announced that they will be supporting crypto in the next couple weeks through their digital wallets. PayPal users will be given the chance to buy, sell, and hold digital assets through PayPal. Upon rollout, the initial cryptocurrencies they plan to support are Bitcoin, Ethereum, Bitcoin Cash and Litecoin.

This is arguably one of the biggest announcements the crypto markets have witnesses since inception. As we have mentioned before, if you want to spark mass adoption in crypto, it was going to be through a Facebook Libra or a payments giant like PayPal. In the next couple weeks, 200M U.S users will have the ability to leverage crypto assets. In addition, 26 million merchants will be able to accept crypto through PayPal in early 2021.

With PayPal introducing crypto to 200M users, it makes other platforms like Coinbase and Square look like peanuts. Coinbase caters to about 40 million users, and Square serves around 30 million. Obviously not all of the 200M users at PayPal will use digital assets, but we can start to see the potential magnitude involved in PayPal’s entrance.

The crypto market got a second wave of positive news from PayPal on Thursday when it was rumored that PayPal was attempting to purchase BitGo, one of the largest players in digital asset custody. Visionary Financial believes PayPal is positioning itself to compete with Banks in digital assets in the foreseeable future. Just a couple months ago, the OCC issued guidelines stating that nationally chartered banks in the United States could offer crypto custody.

Bitcoin Held On Exchanges – Getting To Dangerous Levels?

In our last weekly recap, it was stated that high amounts of Bitcoin were being held on exchanges. Historically speaking, this has occurred in scenarios where investors want to sell opposed to buy. The original jump in BTC held on exchanges came shortly after one of the prominent exchanges, OKEx, stated that they suspended withdrawals on the platform due to internal issues. This instantly caused heavy sell pressure in Bitcoin, but the market shook it off. Despite the exchange still suspending withdrawals, the PayPal news seems to be shielding the OKEx situation.

As we can see from the figure above, Bitcoin held on exchanges has continued to go parabolic. After BTC saw significant upward momentum last week, we are now entering an environment where selling pressure could be coming to fruition. With 41.17K BTC being held on exchanges, that is the highest level in 223 days. This will definitely be something to watch next week. The amount of BTC on exchanges is just too high to build the bullish narrative right now. Eventually BTC will have to “cool-down.”

In our previous weekly report, it was also outlined that Bitcoins trade intensity dropped below the 180 day average. With the bullish momentum last week, this sent trade intensity through the roof.

As we can see from the chart, trade intensity recently had a significant push, but this started to fade as the BTC rally slowed down to conclude the week. With trade intensity on the way down and BTC held on exchanges continuing to go up, the short-term looks more bearish than bullish as the market needs to adjust from last weeks surge. 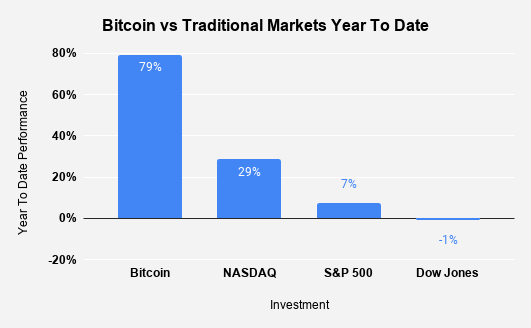 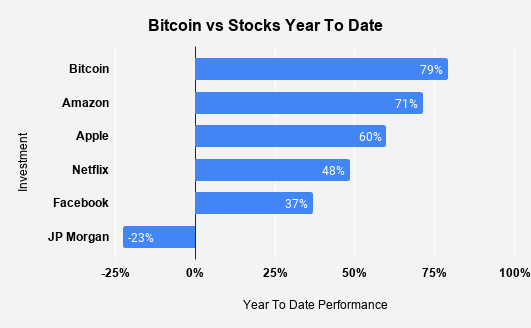 Stocks saw minor losses last week, following 3 consecutive weeks of gains. Similar to the week of October 12th, the markets are relying on another round of fiscal stimulus prior to the elections. Additionally, positive economic data and treasury yields were reason for positive sentiment throughout the week. 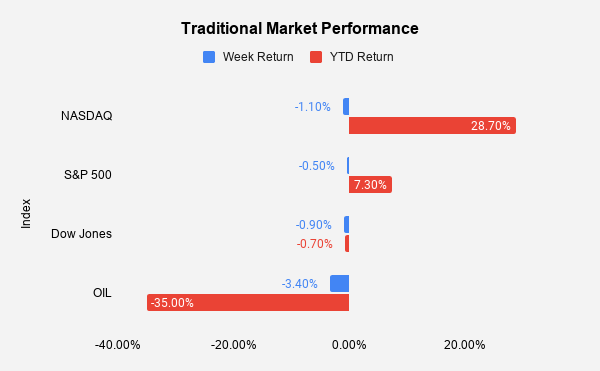 Last week, Treasury Secretary Steve Mnuchin stated that a deal was still on the table for fiscal relief. During the final presidential debate last Thursday, President Trump stated that they were ready to crack a deal if Nancy Pelosi would compromise. Mnuchin stated that the two parties made a lot of progress, but there were areas that they still had significant differences on. Markets showed a bit of life last week following a statement from Pelosi that the two parties were close to an agreement. With nothing agreed on to conclude the week, there should be elevated volatility in the market next week as we get closer to presidential elections.

The 10-year Treasury rallied last week. Yields rose to the highest levels in four months. Many argue that the rise in yields were in anticipation of a Biden ticket that could spark a much larger relief package for the market. Despite this being a bit out of context in our opinion, we think yields went up due to positive economic data. It is important to note that weekly jobless claims dropped to the lowest levels since the pandemic originated in March. Investors were encouraged by these metrics, as long-term sentiment may start to increase pertaining to economic recovery. With yields going up on the 10 year, that simply means that safe-haven assets are seeing less demand. This is typically fueled by investors eyeing risk assets such as stocks.

Despite markets being relatively quiet last week, we expect volatility to jump next week as we get closer to elections. There are still so many uncertainties as to how this election will play out. We still have no idea how long it will even take to count votes this year with the mail-in process. Additionally, if both parties continue to get nowhere next week on fiscal relief, you could see a lot more uncertainty hitting equity markets. As we all know by now, the stock market does not enjoy uncertainty.