The crypto market added $21 billion in value last week, with total market capitalization closing around $360 billion. Bitcoin rallied +7.7%, with many large cap altcoins seeing double digit returns. Stock markets rallied last week as the S&P 500 had its best week since July. Why is the crypto market going parabolic, and why is positive sentiment flooding traditional markets?

Total crypto market value grew $21 billion last week. At the end of the week, total market capitalization was hovering around $360 billion. Bitcoin had a solid week, seeing +7.7% growth. Bitcoins market dominance held steady at 58% last week, due to many altcoins having great weeks as well. Chainlink was the best performer among the large caps, seeing +15.60% upside. 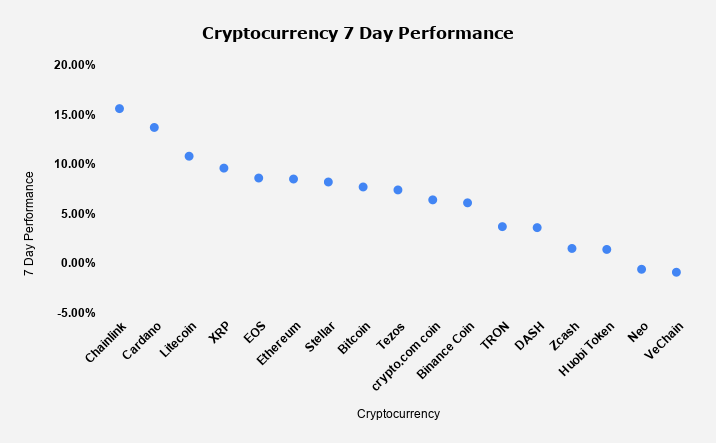 Last week Visionary Financial reported that news developments at Square were fueling Bitcoins price. Mobile payments company Square announced that they made a $50 million investment in Bitcoin. Jack Dorsey, the CEO of Twitter and Square has been a crypto advocate for some time. With a $50 million investment being deployed into Bitcoin, it means that Square essentially put 1% of their total assets into Bitcoin.

Despite many investors believing this will be a short-term price catalyst, we firmly believe it will play a larger impact in the long-term. The news definitely provided price momentum, but we believe the continued rally is due to other fundamental factors. Additionally, with Square making the $50 million dollar investment prior to the announcement, it is appropriate to say that this news was already “priced in.”

Aside from Square, what is driving Bitcoins price fundamentally right now?

It has been stressed for months now that Bitcoins price will be reacting to the dollars price action. Bitcoin continues to be highly uncorrelated to the Dollar. One can further see this by looking at the chart below. It was not a coincidence that as the Dollar made its yearly high in March that Bitcoins price made its yearly low. This inverse correlation has been going on for years, and is something that has never been more important.

Aside from the Square news injecting a lot of positivity into Bitcoin last week, developments in the dollar were the ultimate catalyst in our opinion. With the government inching closer to another financial relief package, it is putting pressure on the Dollar. Based on historical price action, the Dollar could very well retest yearly lows. If this were to happen, Bitcoins price could retest yearly highs. The Dollar got hit relatively hard last week, and Bitcoin has capitalized on it all year long.

Biggest Risk Going Into Next Week – BTC Held On Exchanges

With Bitcoin seeing significant growth last week, we are watching the amount of BTC being held at crypto exchanges. Based on current data, there is evidence that traders/investors may be taking profits in the short term. According to data by Chainalysis, BTC held at exchanges is the highest it has been in 210 days. When people are holding more BTC at exchanges, it could be an indicator that selling pressure is coming to fruition. With BTC going up + $800 over the last week, it could very well experience some selling pressure in the near term. 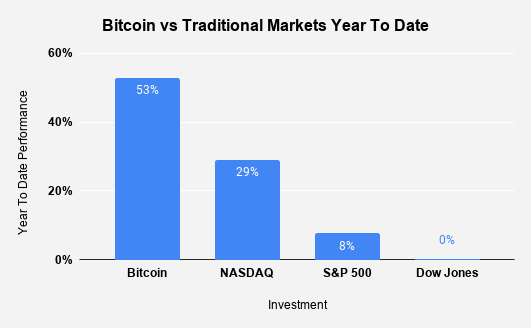 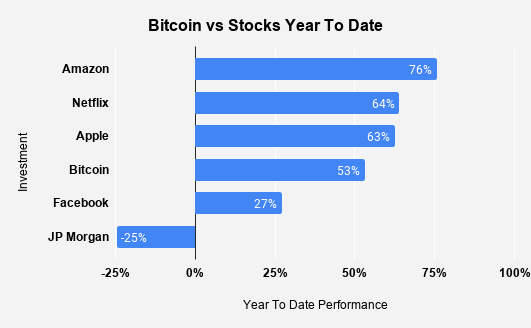 Bitcoin Vs Commodities ( Year To Date ) 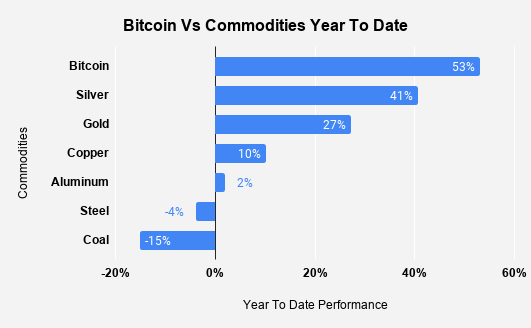 Stocks finished the week positive as the S&P 500 had one of the best weekly performances since July. Investors were following bond markets, as longer term government yields had reached 4 month highs. With these yields increasing, it explains an environment where bond demand is going down and investors are willing to take more risk in the market. With investors anticipating more financial stimulus in the short-term, there was a good amount of positive sentiment flooding the markets this week. 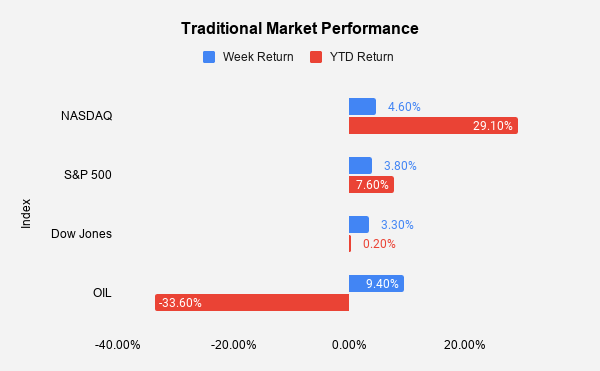 There was market uncertainty to begin the week, as Democrats and Republicans continued to argue over the upcoming stimulus package. It seems as if both parties understand that the economy is still in need of such support, but the amount needed is where they are butting heads. Initially, Republicans were not agreeing to the proposed $2.2 trillion package proposed by House Democrats. As the week progressed, bullish sentiment surfaces as the Whitehouse increased their fiscal stimulus offer to $1.8 trillion. At this point, the deal looks likely, it is just a matter of when this will actually happen. With elections around the corner, households and small businesses may have to wait on more financial stimulus.